The Case Against Internet Explorer 6

This post originally appeared on the Idealware Blog in August of 2009. 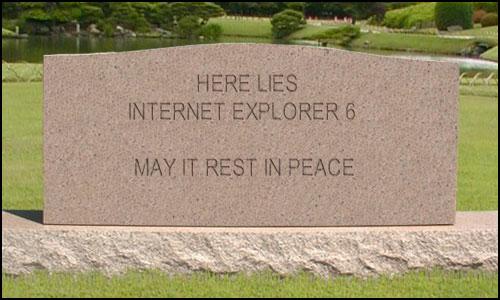 Internet culture addicts like me have taken gleeful note of Mashable’s campaign to rid the world of Microsoft’s Internet Explorer version 6.  Anyone who develops public web pages (and cares if they are compatible with other and/or modern browsers) is sympathetic to this cause.  The hoops that we have to jump through to make our pages look acceptable in IE6 while taking advantage of the nearly decade old CSS positioning commands are ridiculous.  When I was doing web consulting a few years back, IE6 compatibility coding generally took up about 20% of the total project time.

Microsoft’s response to the Mashable campaign was to defend the brontosaurus-like pace of corporate IT Departments in performing application updates. Here’s the pertinent MS Spokesperson quote:

“[Corporate IT departments] balance their personal enthusiasm for upgrading PCs with their accountability to many other priorities their organizations have. As much as they (or site developers, or Microsoft or anyone else) want them to move to IE8 now, they see the PC software image as one part of a larger IT picture with its own cadence.”

Huh! This from the company that kept threatening to drop Windows XP support in order to force us to Vista.

But, sarcasm aside, this is a flawed argument.  The “cadence” in which an IT Department upgrades software should be influenced by changes in the general technology landscape. Business (and nonprofit!) networks use the Internet. Those networks are already integrated with the world at large. Since the web browser is one of the primary interfaces to external data, it’s easy to make the case that it needs to be upgraded more often than word processors and spreadsheets.

Many major webs sites are design with CSS 3.0 formatting. IE6 doesn’t fully support the  11 year old CSS 2.0 specification. IT departments that aren’t prioritizing this upgrade are providing poor support for users who need such websites.  They’re also creating more work for themselves supporting the workarounds. Large companies might have far more computers to upgrade, but they also have software that automates that process.  The key issue is training. Microsoft dramatically changed the user interface of Internet Explorer with version 7, but there are options to default back to the IE6 layout. The hassle of learning the new interface is certainly not as bad as not being able to properly use websites that are designed for more modern browsers.

What really irks me is the way that Microsoft has described the “IE6 must die” campaign’ as being intended to appease “technology enthusiasts”. The push to move users to modern browsers is not about my desire to use non-business applications like Facebook, Digg and YouTube (and classifying these web sites as “non-business”is a pretty debatable point as well).  It’s about my desire to benefit from advancements in web technology, and provide my staff with new tools that promote their mission-focused work.

With the HTML 5 specifications about to become the new standard, IE6 is obsolete. The types of things that IE6 doesn’t support are the things that are making web-based applications viable, affordable alternatives to traditional software.  Microsoft has been in the driver’s seat of the companies that set the pace of technology advancement. They should be consistent in supporting the migration and adoption to those new standards, given a reasonable amount of time.  Eight years is reasonable.  IE6 must die, and Microsoft should join the chorus.