This post first appeared on the Idealware Blog in November of 2009.

Social networks provide nonprofits with great opportunities to raise awareness, just as they offer individuals more opportunities to be diagnosed with information overload syndrome. To my mind, the value of tools like Twitter and Facebook are not only that they increase my ability to communicate with people, but also that they replace communication models that are less efficient. Prior to social networks, we had Email, phones, Fax and Instant Messaging (IM). Each of these were ideal for one to one communication, and suitable for group messaging, but poor at broadcasting. With Twitter and Facebook, we have broader recipient bases for our messaging. Accordingly, there’s also an assumption that we are casual listeners. With so much information hitting those streams, it would be unrealistic to expect anyone to listen 24/7. 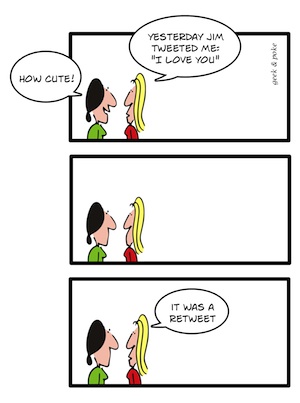 Twitter offers, in addition to the casual stream, a person-to-person option called direct messaging. This is handy when you want to share information with a twitter friend that you might not want to broadcast, such as your email address, or a link to a map to your house. You can only direct message someone who is following you — otherwise, it would be far too easy to abuse. Direct messages have more more in common with old-fashioned IM and EMail than Twitter posts. You can’t direct message multiple recipients, and most of us receive direct messages in our email inboxes and/or via SMS, to insure that we don’t miss them.

So I took note when a friend on a popular forum posted that his organization was launching a big campaign, and he was looking for a tool that would let him send a direct messages to every one of his followers. This, to me, seems like a bad idea. While I follow a lot of people and organizations on Twitter, I subscribe by email to far fewer mailing lists, limiting that personal contact to the ones that I am most interested in and/or able to support. I follow about 250 organizations on Twitter; I have no care to receive all of their campaign emails. But i trust that, if they are doing something exciting or significant, I’ll hear about it. My friends will post a link on Facebook. They’ll also retweet it. The power of social media is — or, at least, should be — that the interesting and important information gets voted up, and highlighted, based on how it’s valued by the recipients, not the sender.

Social networks differ primarily from email and fax in that they are socially-driven messaging. The priority of any particular message can be set by each persons community that they tune into. My friend thinks his campaign is the most important thing coming down the pike, and that he should be able to transcend the casual nature of Twitter conversation in order to let me know about it. And, of course, I think that every campaign that my org trumpets is more important than his. But I think that proper campaign etiquette and strategy is to blast information on the mediums that support that, where your constituents sign up to be individually alerted. If you want to spread the word on Twitter or Facebook, focus on the message, not the media, and let the community carry it for you, if they agree that it’s worthy.