The Cults That Get Things Done

This post was originally published on the Idealware Blog in December of 2009. 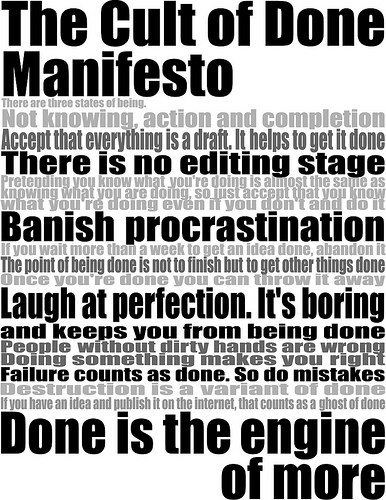 Poster by Joshua RothaasCC BY 2.0
Here at Idealware, an organization that’s all about nonprofit-focused software, we understand that the success or failure of a software project often has far more to do with the implementation than the application. So, in addition to discussing software, we talk a lot about project management. To many of us, it seems like the only thing worse than devoting our scant resources to the task of building and maintaining a complex project plan is living with the result of a project that wasn’t planned. While I’m a big a fan as the next guy of PMP-certified, MS Project Ninja masters, and will argue that you need one if your project is to build a new campus or a bridge, I think there are alternate methodologies that can cover us as we roll out our CRMs and web sites, even though I know that these projects that will fail expensively without proper oversight.

The traditional project planning method starts with a Project Manager, who plays a role that fluctuates between implementation guru, data entry clerk and your nagging Mom when you’re late for school.  The PM, as we’ll call her or him, gathers all of the projected dates, people, budget, and materials, then builds the house of cards that we call the plan.  The plan will detail how the HR Director will spend 15% of her time on a series of scheduled tasks that, if they slip, will impact the Marketing Coordinator and the Database Manager’s tasks and timelines.  So the PM has to be able to quickly, intelligently, rewrite the plan when the HR Director is pulled away for a personnel matter, skewering those assumptions.

My take is that this methodology doesn’t work in environments like ours, where reduced overhead, high turnover and unanticipated priorities are the norm.  We need a less granular methodology; one that will bend easily with our flexible work conditions.  Mind you, when you give up the detailed plan, you give up the certainty that every “i” will be dotted, every “t” crossed, and every outcome accomplished on schedule.  But it’s possible to still keep sight of the important things while sacrificing some of the structural integrity.

First, keep what is critical: clear goals, communication, engagement and feedback.  The biggest risk in any project no matter how well planned, is that you’ll end up with something that has little relation to what you were trying to get.  You need clearly understood goals, shared by all internal and external parties. Each step taken must factor in those goals and be made in light of them.  All parties who have a stake in the project should have a role and a voice in the plan, from the CEO to the data entry clerk.  And everyone’s opinion matters.

Read up on agile project management, a collaborative approach that is more focused on the outcomes than  the steps and timeline to get there.  Offload the project management by focusing on expectation management.  The clearer the participants are about their roles and accountability for their contributions, the less they need to be managed.  Take a look at the Cult of Done (their manifesto is at the top of this article).  Sound insane? Maybe.  More insane than spending thousands of dollars and hours on an over-planned project that never yields results? For some perspective, read The Mythical Man Month (or, at least, this Wikipedia article on it), a book that clearly illustrates how the best laid plans can go horribly wrong.

Finally, my advocacy for less stringent forms of project management should not be read as permission to do it haphazardly.  Engagement in and attention to the project can’t be minimized.  I’m suggesting that we can take a more creative, less traditional approach in environments where the traditional approach might be a bad fit, and for projects that don’t require it.  There are a lot of judgment calls involved, and the real challenge, as always, is keeping your eye on the goals and the team accountable for delivering them.